Every bonsai grower in Minnesota knows the dreaded feeling in the spring. That first surge of warmth in the spring. The sun is out and the temperature climbs into the 60s, maybe even 70. It feels so good to be outside. It gets the itch going to start working on your trees. But wait, it’s still only the middle of March. There are still plenty of really cold nights to get through before your trees can safely be outside, but your trees have been sleeping long enough, and they are ready to wake up at the first sign of warmth. You check on your trees, and sure enough you see the first buds starting to swell. You try to talk your trees into staying asleep, but they are not listening. You can try to repot them to slow them down, which can work for a little while. Even then, they still start pushing their buds open. You sit helplessly watching the sickly light green whitish leaves appear. They may even push out new growth, which is leggy and white. Some are fortunate enough to have cold frames in the ground which would stay colder longer, but those above ground warm up fast in the sun. 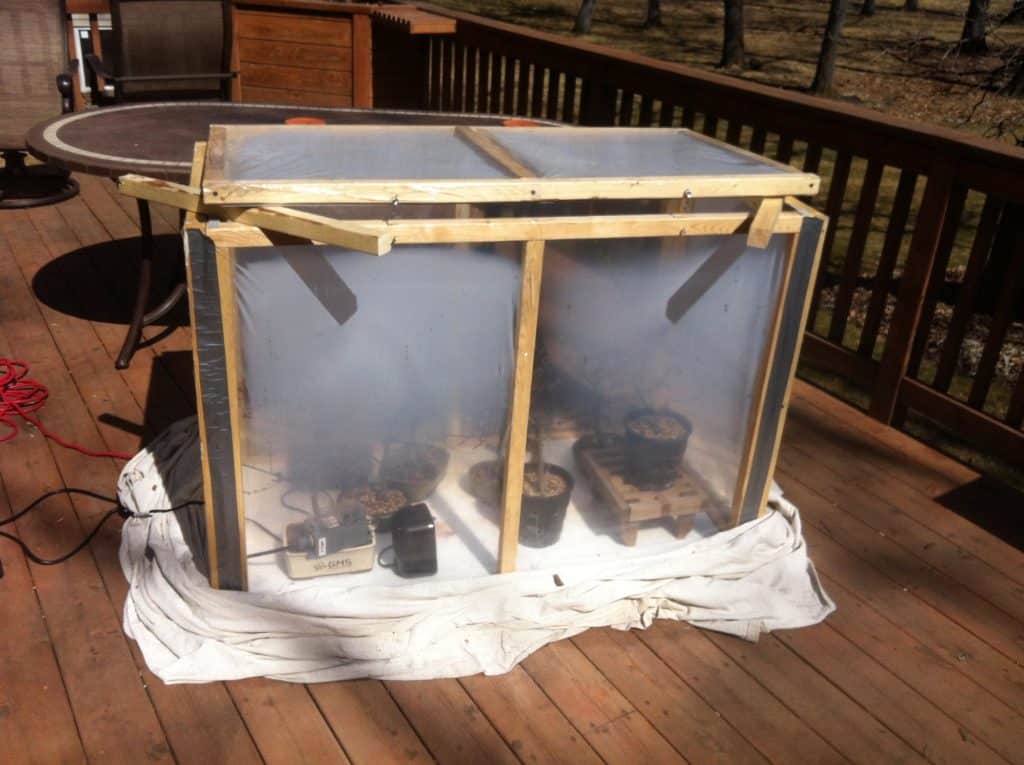 This year was especially bad with two surges above 70 degrees before the first week of April. When the first warm spell hit, I had an idea. Why not build my own little portable greenhouse for my trees outside. I decided to try it. My maples were the main ones starting to leaf out, so I decided to try with those. I do not have a huge collection, and I have a fair amount of evergreens which do not pose the same problem as deciduous trees. I decided to make it 2 feet wide and 4 feet long. I went out and bought 2×2 pine framing wood from Menards. It only cost about $1.50 per 8 foot piece, and it only took about 10 pieces (actually a little less but I always count on a mistake or two). The next problem was insulation. I thought by putting plastic on both sides, it would create an air gap which would serve well. The problem is that almost all plastic sheets are fairly cloudy white. It would let some sun it, but I wanted to maximize the amount of sun. I found the perfect thing at Ace hardware. Clear plastic that was 2 foot wide by 50 foot long with adhesive back for placing on carpet when you paint. I framed the pieces so everything was 2 foot apart. Next, I made the 4 sides. Then lastly, the top piece. Since, this is only a temporary structure, I used screws to connect the sides together. I placed hinges on the top so that I could open the lids when it was warm during the day, and close it at night. 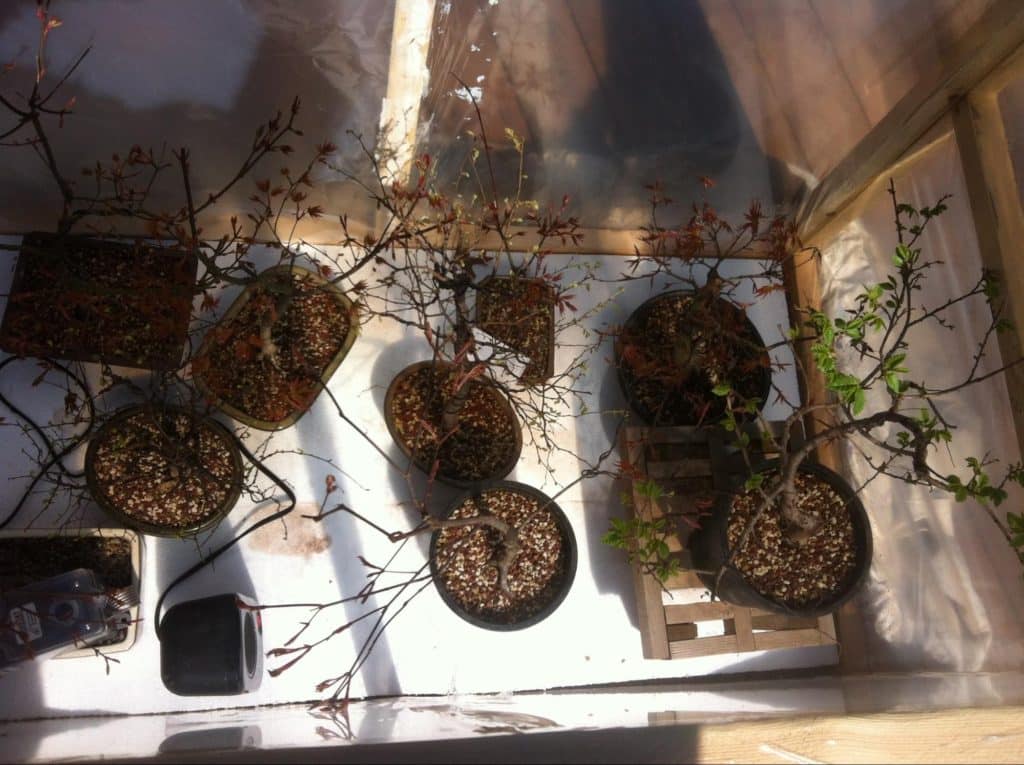 I bought a sheet of styrofoam for the bottom to provide insulation from the ground. I then took my thermometer sensor from the cold frame and put it in to test the temperature. I thought it would stay above freezing if it did not get too cold at night, but I was wrong. In the morning, it was the same temperature inside as outside. I added weather stripping, but it still got cold. So I took the thermostat and small heater from my cold frame and set it up inside and set the thermostat to 33 degrees. I would watch it when it was 27 degrees outside, and it would turn on every 30 minutes or so and stay on for 3-4 minutes. That seemed acceptable. It is a very small heater as you can see in the pictures, so it does not blow out that much air and I did not put any trees directly in front of the heater. The coldest night it went through got down to 16 degrees, and it still had no problem keeping the trees warm. I took the trees out whenever possible to get more air and light, mostly on weekends. In addition to avoiding sickly growth which you may have to cut off once the trees get outside, this also gave the trees a longer growing season. If you have a lot of trees, or large trees, this may not work, but so far it seems to be working well for me. The first picture of the trees was taken on March 28th, and the second picture was taken on April 6th. You can see that some are fully leafed out. 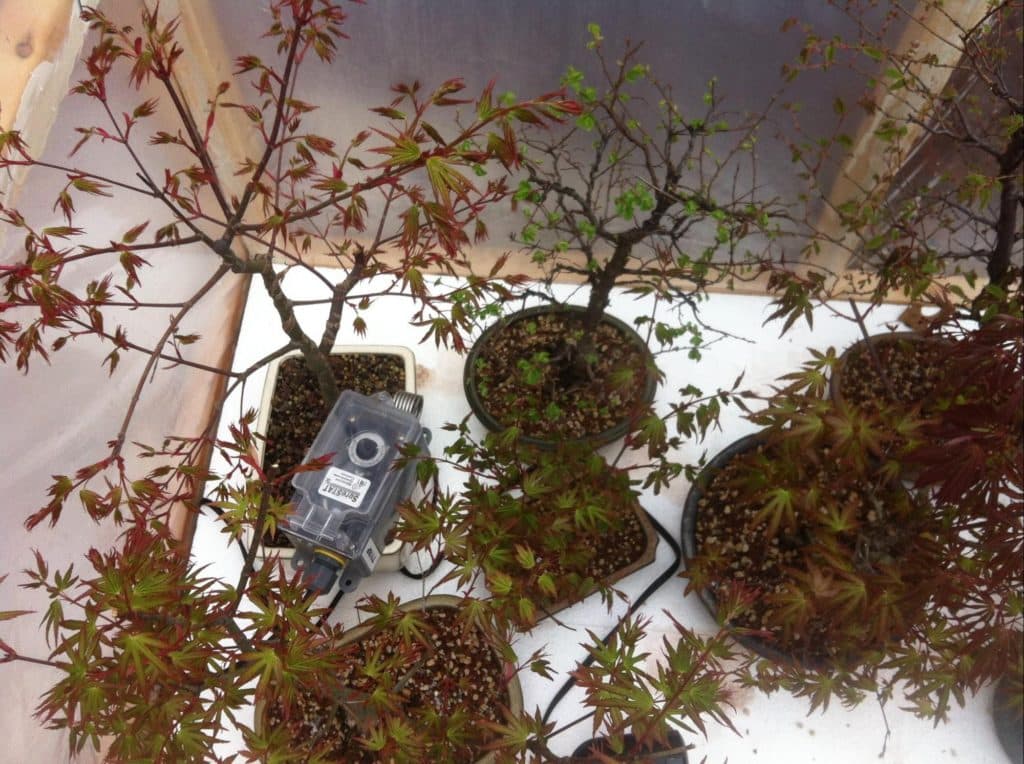 I did run into some problems. First, when it rained and water collected on the top, it dipped enough for the two adhesive sides to touch and stick together, so my air gap on top was not as good. If you were to build this, you could use the plastic that is used to seal windows in a house, but it is a lot more expensive than the plastic I used. Also, the inside of the box gets really hot during the day if you do not open the lid. It got over 100 degrees one day when it was only around 55 degrees outside. The trees seemed to survive, but I would not want to subject them to that temperature too many times. Overall, I would count this a success.