Finding a good way to work on trees have been a struggle. Like most people, I started by simply sticking my tree on a table. Later I went with the somewhat more sophisticated system of putting an upside-down pail in a concrete mixing tub. Once I graduated to the intermediate level of bonsai practice, I decided to celebrate by putting a turntable on this upside-down pail within the concrete mixing tub. This works o.k., but eventually I inevitably want to work on my trees standing up. 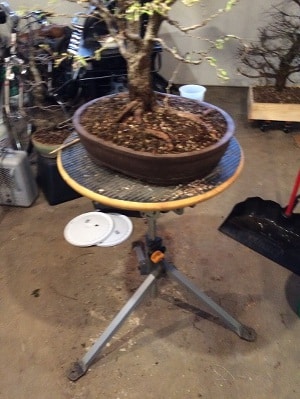 Luckily, many places make turntables that will lift and raise your tree, also rotating. It is important to be able to rotate your trees, and also accommodate working on them at eye level. I admit to having developed a particular fondness for very large trees, some in excess of three feet tall. While not looking for it, in Chicago I happened to come across a turntable made by BC Bonsai, who had a booth there. Most of these can cost in excess of $300-400, but this one was $200. It basically consists of a tripod, turntable and a screw to lock it in place. While I could build this myself, I have learned to value spending my time on things I want to do instead of fidgeting with things I am not good at. 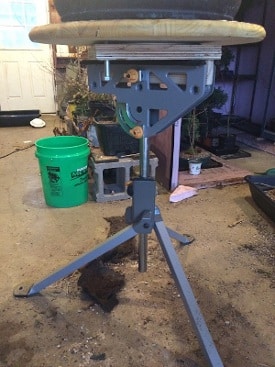 A decent turntable such as this allows you to raise and lower trees according to what you are working on. They allow you to quickly rotate trees to view and work on all sides. And they generally have a feature to lock in place to prevent accidental movement. One nice feature that this one has is ease of deconstruction. I can quickly break it down and put it back up to bring to workshops. All in all, I consider it one of my best bonsai investments so far.