Last year I wrote some remarks on bud-pinching.More on that now:

The reasons you bud pinch are twofold. 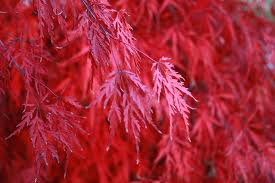 First, it stops the branchlet erupting from elongating (mostly), so you can keep the internodes shorter. Second, the bud makes a hormone (auxin) that suppresses bud eruption behind it. SO, if you don’t do it, internodes get long and buds further back on the stem are suppressed/weaker/may-not-form/erupt-at-all. And you know the saying, “Power corrupts and absolute power corrupts absolutely.” Well the remark about hormone suppression by a bud goes double for it if the bud in question is the shoot apex (that is, uh, the tip of the whole branch). So, if you can’ pinch ’em all, at least nail the shoot terminals. If you just get the leaves from the terminal bud, and leave behind the actual apical meristem, you have shot yourself in the foot. Nail it!

It is said that trident maples don’t get denser by bud-pinching. Now really, the effect on the elongating shoot may not be big, but the release of the oppressed buds back along the branch is pretty clearly operative. And in my experience, it does restrain shoot elongation. On tridents, too, the only way to get the tip soon enough is to push it sideways, so you can get a grip on it (the leaf pair around the bud is pretty tight on tridents, and the terminal bud is small). It is pretty easy to spot, as it comes out perpendicular to the first leaf pair. 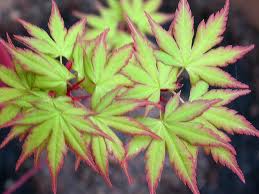 Keeping the internodes short is, you may think, pretty much an end-game strategy for established bonsai, not trees in training. But if your tree, and especially so for maples, tends to get leggy anyway, bud-pinching and defoliation are the only way you are going to get anything reasonable, even in the growing stage. So on leggy trees, as soon as you have a branch you are going to keep, work it! The worst maples are the Korean Maple (which is hardy here! And Gertens’ has tons of them!), the lace leaf palmatums, and the japonicums/Shirasawanums (not sure there is a difference) (like “Full Moon” and “Autumn Moon”). A. palmatum “Bloodgood” is one on everyone’s lust list, but it is so leggy, it isn’t really worth the bother. Uncontrollable, so don’t waste another ten years on one. There are further cultivars of “Bloodgood” that aren’t so leggy: I have two of them (but lost the labels, so I can tell you what they are). “Osakazuki” is another lovely but hopelessly leggy plant. 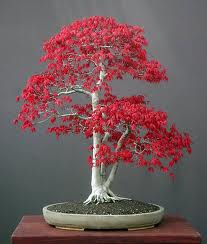 I suspect that our native Norway silver and sugar maples fall into the leggy category. Virginia Harvey had a really fine silver. But there are other reasons to stick with the tridents and palmatums. Our native maples tend to get a heart rot that will eventually kill them from any deep or larger wound. Amur maples are terrible about it. Palmatums are less susceptible and tridents seen to be resistant. I remember a few years ago when a storm tore up a number of Norways on the U. Minn. campus: all the fallen limbs (and they were major!) were rotten in the middle. If you do work with these (i.e., you have one heckuva collected specimen), make sure your tools are clean and sterile, sterilize the wound, and use a sealant that absolutely blocks bacterial access, like Elmer’s glue. I lost a really nice, big A. palmatum “Katsura” by thread grafting a branch on it. The graft carried the pathogen into the heartwood, and two years later, it was gone.