The idea we are taught of layering finer soil over coarser soil doesn’t work. Leon Snyder calls this a “perched water table” (or in our terms, a soaking-wet boundary layer). When you add smaller particles over a coarser layer, what happens is the smaller particles infiltrate the coarser ones. (And then you go and exacerbate it with a chopstick!) You would think that in a mixture particles of uniform size the water content would be greater, lying in the empty spaces (free volume) between the particles, but this isn’t so, because the water wants to drain out of the void spaces, not hang around. 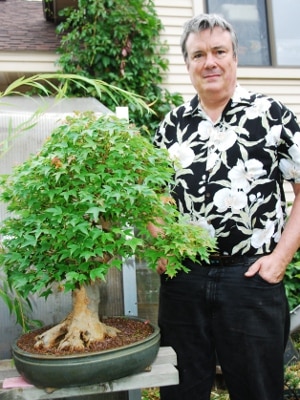 My idea is this: in a collection of hard, impermeable particles (simplified model of water retention by soils, ignoring absorption), most of the water is held where the particles touch each other by surface tension. It’s called “bridging”. In a collection of uniform particles, the contact area is less than in a mixture of particles of different sizes, because the small particles in the latter fill the spaces between the bigger particles and more particles touch each other. Also, the finer the soil, the more contacts, the more bridging, and the higher the water content. Which is why we use coarse soils, in addition to air content and temperature considerations. (A really fine sand can hold so much water it can be shaped like dough). Now add back in absorption: particles can soak up even more water inside the particles. You have all the mass that you had when you had uniform particle size, plus all the mass you added by sifting small stuff into the holes, plus all the water inside the particles. But this doesn’t really change the mechanics, just the capacity. SO, if you want a drainage layer, you need to make it of less-permeable particles of similar size to the main soil, and preferably impermeable to water. And after the initial rush of water from the soil, drainage of the soil occurs via the surface film of water covering each particle, flowing through the contact bridges.

Organic versus inorganic
I had heard that ficus do better in organic-based soils than akadama-based. Don’t know why this should be so, and inquiries with an agronomist friend have shed no light. Bark mixes do contain tannins, which have some antibiotic properties, and may have more cation-exchange properties (the ability to retain things like iron, calcium, magnesium),. Anyone has any ideas, I want to hear them.