East Bay Bonsai Society Spotlight: Potting of a Collected Rocky Mountain Juniper
On Saturday, March 24th Ryan Neil paid a visit to the Bonsai Garden at Lake Merritt to demonstrate potting techniques on a collected Rocky Mountain juniper. Ryan is quite familiar with this tree, he previously styled it at the 2010 Golden State Bonsai FederationConvention in Santa Clara, CA. He has cared for it ever since at his nurseryInternational Bonsai Mirai, located just outside Portland, OR. Andrea Burhoe, an active volunteer of the Bonsai Garden at Lake Merritt purchased the tree at auction in 2010 and has graciously donated it to the Collection. The tree will reside at Bonsai Mirai as it regains its strength. Once recovered from the potting session, Ryan will release the tree and it will be inducted into the Collection at the Bonsai Garden at Lake Merritt.

This Rocky Mountain Juniper boasts an impressive base. Collected in 2008, the tree underwent an initial styling and potting in just 4 years. This is a true testament to the individual who collected it from the wild and the skillful hand of Ryan pushing the tree through its paces. Those in attendance of this potting demonstration were fortunate to gain an insider’s glimpse of Ryan’s work. The following are some notes that Jeff Clarkson of the East Bay Bonsai Society was able to collect, during this fast paced and very exciting ride, from plastic training container to pot.
Second to proper watering, (re)potting of bonsai tree is most important, explained Ryan. There are three reasons to repot bonsai: (1.) To change the style (2.) Lacking water percolation (3.) Resolve a problematic condition

Water percolation is a biggie (you’ll be tested on this later in the article). Proper water percolation allows for a good balance of water and oxygen around the roots of the tree. When soil breaks down, water percolation decreases and the balance of water and oxygen reaching the roots is not optimal. The bottom line; we use soils that allow for the largest window of opportunity to achieve such a balance. This allows us some leeway to adapt to changing weather conditions and our mistakes in watering technique. We should listen to the echos of the most experienced bonsai professionals – watering is something we are all trying to understand and perfect.

In order to prepare the Rocky Mountain juniper for potting it must have good health. To achieve this, immediately after the initial design in 2010, the tree was held in the same position that it will be in the new pot. Notice in the image above that a small 4″ x 6″ block is used behind the plastic container to prop it up in the desired position. Ryan noted that if the tree was not cared for in the final potting position prior to potting it, the tree would have yet one more challenge to overcome after being placed in a pot.

The scent of healthy roots filled the air after the tree was removed from its plastic container. Ryan quickly inspected the bottom of the rootball. It appeared as though he used this as an indicator to gauge the overall health of the root system. He pointed out healthy roots with white tips. After this, Ryan used his bare hands and a specially shaped bamboo stick to gently remove pumice and unravel roots from the backside of the rootball. The shape of the bamboo stick served as a means to directionally displace soil (the traditional use of a typical chopstick displaces soil in all directions).

Great emphasis was placed on handling the roots with care. At no point in time was the tree allowed to rest on its roots – the tree was always held above the table or rested on its side such that the roots were not bearing the weight of the tree (Nice work holding the tree Tim, we saw the bead of sweat run down your face!). A spray bottle was routinely used to ensure the roots stayed moist. Ryan noted that the soil of a tree must be moist before he begins any (re)potting process.

This tree Ryan holding the juniper was placed in pumice after being collected. The use of pumice on collected trees allows the temperature of the pot to stay regulated, which in turn increases the average temperature within the pot. These warmer conditions encourage stronger root development and subsequently lead to a healthier collected tree.

Ryan continued to remove pumice from the rear portion of the rootball and he eventually reached the original soil from which the tree was growing in the wild. At this point it appeared as though he tried to conserve this native soil and only remove it if necessary for fitting the tree into the pot. Under the soil line was a large feeder root. This root posed a challenge because it ran a large portion of the width of the tree and limited the placement of the tree into the pot. Ryan used root cutters to remove a small portion off the topside.

The wood removed from the feeder root was redish / purple in color. Ryan explained that this is where the juniper injected sap into its wood. This in turn preserves the wood (preventing rot) and protects the tree from boring insects. Another important note, in contrast to pines, junipers have linear growth; sap cannot flow laterally across the tree. This means that every major root in the rootball is directly linked to, and is feeding, a specific branch on the tree. Removal of any large root will more than likely result in die-back of a branch or a large portion of a branch. Once Ryan reached one of these larger roots on the underside of the feeder root, he stated that this is as far as the tree could go with respect to root removal from that area.

There were several pot options selected for the tree. Below are some pictures of the tree in the various pots. 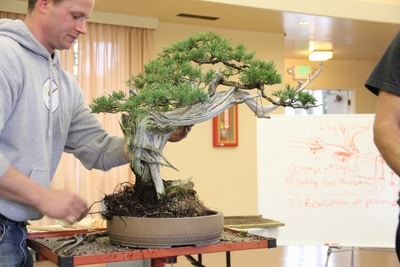 An open discussion was held on which pot should be selected. During this time several key points and opinions were made.

• The condition and health of the tree dictates what pot size should be used.
• A small pot emphasizes the tree. Trees entered into the Kokufu Ten in Japan often have slightly smaller pots.
• A pot should never be used to offset visual weight.
• Junipers grow better in deeper pots.
• By Japanese standards, a pot without a lip is quite undesirable. Pots without lips are much more common outside of Japan.
• It is undesirable to match the color of a pot to a color on the tree.
• Pots used with trees that win Japanese shows often have a red hue.
• Small feet on pots make the bonsai feel light and elegant.
• This juniper looks best in a red hue and poor in gray colored pots.
The decision came down to pot option 1 and 2. Ultimately, it was decided to use option 1 which is an antique Chinese pot. The following sequence of pictures shows Ryan preparing the pot for the tree.

The juniper was anchored very securely into the pot with steel wire. On the left side of the tree a small wooden block was placed under it. Two screws were driven into deadwood below the anticipated soil line and served as a tie-down area for the wires. Wire wrapped around the screws was used to drive the tree downward onto the wooden block below it. On the right side, a small hole was drilled into the deadwood (below the anticipated soil line). Tie-down wires were threaded though the hole and used to anchor a small section of the feeder root, that extended beyond the pot, to the lip of the pot.

Prior to putting the tree into the pot, a very small amount of soil was placed into the bottom. This soil was a mix of akadama, pumice and lava. Contrary to what we normally see, a small grain size, ~0.25 inch, was used. After the tree was anchored into the pot, larger grain soil, of the same mix, was worked into the pot. A large amount of roots were left hanging outside the rear part of the pot. Ryan intentionally did this so that he could add both soil and roots back into the pot. He layered the roots and soil alternately to make a soil-root-soil-root sandwich – tasty! The extra long roots were wrapped around the parameter of the pot. Upon future repotting sessions, roots around the perimeter of the pot will be reduced however, at this time it is important to keep the roots intact on this collected tree. Specially shaped bamboo sticks of various sizes were used to work soil into the pot and roots. Initially, soil was worked in along the edge of the pot. Soon after, soil was worked into the roots from the base of the trunk.

Lastly, Ryan thumped both sides of the pot at the same time with his fists. This provided a final tampering of the soil into the pot.

The final contour of the soil at the surface was sculpted by hand. Any roots above the soil line were cut away with shears.

Ryan stated the newly potted tree will need to be heavily watered. This will flush out any small particles that could potentially collect within the pot and reduce water peculation (remember your new vocabulary word from before?). When the tree returns to Ryan’s green house it will be misted 2-3 times a day and sheltered from strong sun and wind. Furthermore, a layer of sphagnum moss and green moss graded between quarter inch and 16th inch grates, and mixed 50-50, will be placed over the surface of the soil. Yamagoki (Japanese mountain moss) can also be used for this.

After nearly 2 hours, the Rocky Mountain juniper was potted – hurray! Here are some pictures of the finished product.

Many, many thanks to the East Bay Bonsai Society for permission to re-print this article.