This is an update of an article originally published in the MBS newsletter in 2004. 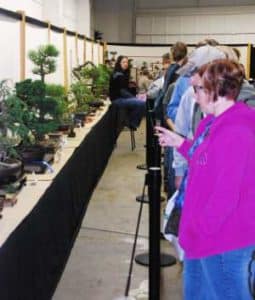 The Minnesota Bonsai Society first participated in the Minnesota State Fair in 1975. That year MBS and the Minnesota Horticultural Society shared the room and held a joint show. The club was only four years old, still small, and the members probably weren’t sure they would have enough trees to fill the room the first year. The show was held in the same room we use today. The white boxes and tiered tables were covered with burlap that first year. A member hand-lettered tree identification tags as the trees were brought in. The bleacher area, hidden now by our cloth backdrops, was used to partition the back of the room into a rest area for members. In the early days a small group of club members spent hours creating their own displays using handmade shoji screens and tokonomas, staffing the show, and promoting bonsai.

There is something magical about a small group of dedicated people determined to put on a good show. They would arrive on Thursday evening for setup, work into the early hours of Friday morning, go home to grab a few hours of sleep, return to staff the show Friday and Saturday, and complete tear-down on Saturday evening. During the show members would scavenge benches from the fairgrounds, bring them in to seat the audience during demonstrations, and take them back outside after each demo was over. Vern Weeks, one of the club’s founding members, constructed a beautiful tokonoma and would stand for hours in a kimono and slippers answering visitor questions.

In the late 1980s MBS member Ann Erb, a set designer and carpenter, constructed the display we still use at the State Fair show. Ann and Rick Raygor designed the tree label database using the Apple-based FileMaker Pro program and integrated it with a judging spreadsheet. The display has survived basically intact since the late 1980s. (Ann is now a member of the California Bonsai Society in the LA Basin area, which uses a modified version of her MBS display.) Black paper was substituted for the white paper table-skirting after 2000 and black cloth later replaced the paper. The table layout was changed in 2009 to reflect the pie-wedge shape of the room and open up the demonstration area for better sightlines. In 2011 a viewing stone display area was added. New backdrops that require less assembly and are designed to work with the new table layout are in the works for 2012.

Competition, judging, and ribbons are a big part of the Minnesota State Fair. Members did not initially want their show to be judged, but the club was required to award ribbons to meet State Fair guidelines. Judging bonsai has always been controversial in the bonsai community. In September of 1992 Roy Nagatoshi wrote a treatise for MBS that gave his perspective on the subject:

“I am totally against judging bonsai that are designed, trained, and cared for by an experienced artist. However, those bonsai created by a novice and intermediate persons who are still at the stage of learning the basic techniques of designing and caring of newly acquired trees may be judged for the benefit of evaluating their progress. “ Roy further says, “Bonsai is the creation resulting from the application of a combination of both HORTICULTURAL SKILL and the ARTISTIC SKILL. Any omission, lack of, or over bearing of these skills will affect the level of its quality and value.” 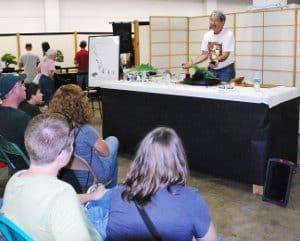 The judging system used by the Minnesota Bonsai Society evolved over the years and reflects the spirit of Roy’s statements. At first ribbons were given to trees that looked good, without any type of quantitative judging system. This, not surprisingly, generated a lot of discussion and disagreement, and in the early 1980s a group of club members developed a point system for judging. Initially the show was judged by a group of three senior club members, or by a visiting master if one was in town during the show.

In 1990 the judged classes were Bonsai, Shohin, Novice, and Penjing. The judging form has criteria broken down by design, technique, and horticulture, with 10 points allotted to each one. A Best of Show award was given in each class. Later revisions added artistic intangibles to the judging criteria, gave fewer points to horticulture, and limited the total points to 35. Penjing, or Chinese-style bonsai, were judged separately by a “penjing group” using standards they had developed. According to notes in the State Fair judging file, penjing landscapes were not eligible for Best of Show, but individual trees in the penjing style were eligible if entered in the Bonsai class. In 2008 MBS purchased six shoji screens and added a display class to the show.

1995 judging revisions limited the classes to Open Bonsai, Novice, Exhibit Only, and Shohin. Trees entered for judging in the Open Bonsai class were further separated into divisions and eligible for Best in Division awards. Five different divisions were chosen each year with an “other” division added later. Forests and collected trees became standing divisions in 1997 and a tropical division was added in 2006. There are four standing divisions under Open Bonsai (forest , collected, tropical, and other) and an additional two divisions chosen new each year. One of the two divisions is usually a tree style and the other a tree type. In 2010, boxwood was the tree type and clump was the style.

In the early days of the show Ann Erb remembers that there were between 72 and 125 trees exhibited. Generally from 20 to 30 members bring trees for exhibition. Going back through the files, the number of trees exhibited ranges from 68 to 109, with roughly one-third being Exhibit Only trees. Entries in the Open Bonsai class have ranged from 25 to 45 entries; Shohin from 5 to 14 entries; and Novice from 2 to 15 entries.

The judge’s written critiques have become more important over the years as a tool to help plan for the tree’s future refinement. Many of the trees entered as Exhibit Only now also receive critiques. In the past the opportunity to listen to the judge’s comments has been limited to one or two note-takers who help out during the judging. In 2012 the club is planning a special critique session with Ryan Neil on Friday evening after the building closes to the public. The critique is open to members who wish to experience a professional critique firsthand.

This year’s show is an opportunity to exhibit trees that you have worked on and are proud of, and Ryan will be a great judge to give you guidance for your trees’ future. The opportunity to participate in the 2012 State Fair Show is now! THINK ABOUT DISPLAYING A TREE! There is time to get ready before next September!

The 2012 State Fair open bonsai divisions are: fruiting and flowering, cascade/semi-cascade, tropical, forests, collected, and other.

Special thanks to: Nellie Hofmeister, Randy Clark, Terry Davis, and Ann Erb for providing historical information for this article.

…the first showing with the MN Hort Society was in the smaller display room where the Hort Society has always shown. I believe we had three tables on one wall. The Fair people and the Hort Society were very impressed. We were then asked by the Fair if we thought we could fill the large room for 1976 and we took the plunge with enthusiasm.